skip to main | skip to sidebar

Inspiration From The Overcomer

I love true inspiration from people with first hand experience. Yesterday, I stumbled upon a great message from one of my new favorite television characters...Dascha Polanco better known as Daya Diaz from Orange Is the New Black. There's just something about Inmate Diaz that resonates with me. It could be the simple fact that she's the definition of a BBB chick, maybe it's her Dominican accent and New York flare or the hopeless romantic character that she plays. Nevertheless, Dascha aka Daya is my girl! And after her note to the world which inspires all women with a little extra to reach for the stars, the deal was sealed now further confirming why she tugs at my heart. Here's what Dascha had to say, "I always doubted auditioning because of my weight, I've always acted and pursued theater - it was something I had always wanted to do when I was young. But I felt I would be rejected because of my physical appearance. This has given me the opportunity to show that I have curves and I have talent too...It's been a battle, you know, because I've never been skinny. But I've embraced it. now I have the opportunity to show everyone that this is sexy. I can dress in the same attire as someone else and carry myself in a sexy manner, a beautiful manner and prideful manner. What matters is how I play the role - not my size."

Congrats Dascha on your success with #OITNB and for landing a "regular" role in season 3. 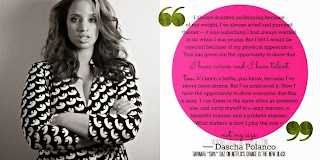